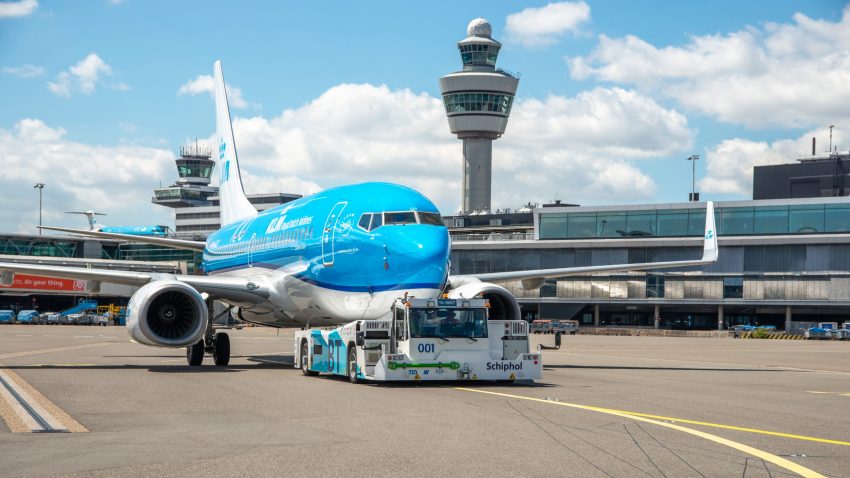 The aviation industry is continuously working to reduce its emissions. Both airlines and airports realize that sustainability and efficiency will be key drivers for growth in a post-COVID future. When looking for opportunities to improve, we often think about technological advancements related to aircraft. There are however plenty of other opportunities to reduce fuel consumption and noise emissions. Sustainable taxiing has a major role to play.

Traditionally, aircraft move around the airport under their own power, but moving on the ground using the displacement of air by jet or propellor engines is both noisy and energy inefficient. There are alternative means to move aircraft on the ground. These techniques are commonly referred to under an umbrella term; ‘sustainable taxiing’. Examples of sustainable taxiing include the use of small electric motors built into the nose or main landing gear or by making new uses of external towing equipment. The most promising concept involves the use of external towing equipment to move aircraft. In the traditional mode of operation, tugs are used to push aircraft back from the gate after which they decouple in the ramp area. In the new concept, tugs tow the aircraft to an area near the runway.

Trials with a device called ‘Taxibot’ have been conducted at Amsterdam Schiphol airport in their ambition to operate the most sustainable and high-quality airport in the world and to achieve emission-free operations by 2030. The objective was to test this concept of operations and its feasibility, and the results were promising.

The introduction of this novel taxi method within the current operational concept will however also introduce significant operational challenges, as airport processes are currently highly adapted to conventional procedures. As an example, decoupled Taxibots, located in this new procedure at the runway, will have to return to the apron to pick up new aircraft. This introduces additional traffic on the already congested apron. Furthermore, the delays due to the decoupling aircraft from tugs, which we currently handle on the apron, are now displaced to areas near the runway. The current airport infrastructure might not be optimized to accommodate this new concept of operations. More about these and other challenges can be read here.

To assess if, and where,  bottlenecks and hotspots occur with the use of  Taxibots at Schiphol airport and in order to quantify potential savings in terms of delay and fuel consumption with respect to the traditional way of taxiing, we employed our up-to-date fast-time simulation (FTS) model of the Schiphol ground infrastructure. The operational procedures in this model were adapted to resemble Taxibot operations.

The key findings of the study were twofold. On one hand, a reduction in fuel consumption amounting up to 64% was found for outbound traffic for some of the scenarios tested. On the other hand it was found that for some scenarios the Taxibot operation resulted in bottlenecks and accumulation of ground delay. Large differences were found between the scenarios, of which varying the location of the uncoupling positions played an important role. This proves that the uncoupling locations have a profound effect on ground delays, and that these locations need to be chosen carefully if an airport chooses to implement the concept. FTS studies can help to identify those optimized locations.

At To70, we have been closely involved with developments in the GSE market. We collaborate with universities, airports and GSE manufacturers to determine how the electrification of the ground segment can contribute to a more sustainable and efficient mode of operation. Contact us if you want to know what the possibilities are for your airport.

With a background as commercial pilot, and a master’s degree in Aerospace Engineering from Delft University of Technology with additional research work at NASA, Xander has a broad knowledge of aviation from both a practical and theoretical point of view. The diversity of challenging projects, which benefit from this broad perspective, is what interested Xander in a job at To70.