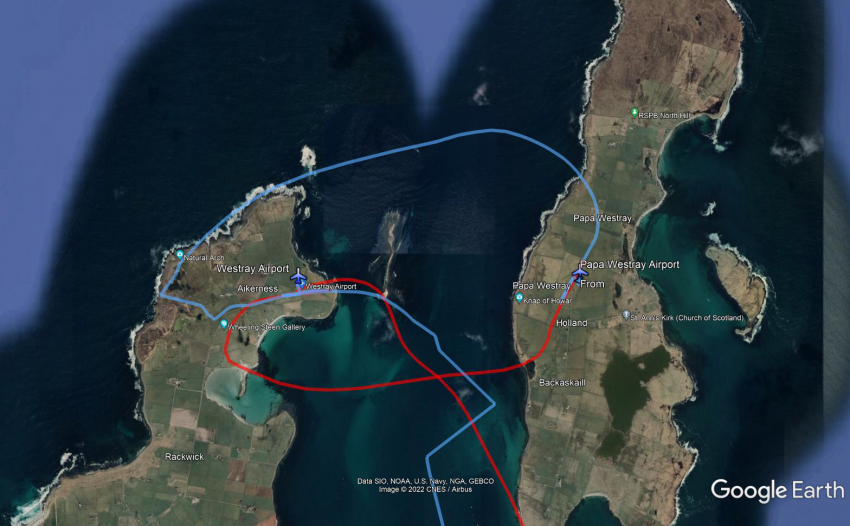 Part 2 – The shortest commercial flight in the world

To commemorate 60 years of operations by Loganair, To70 is publishing a pair of articles about the past, present and future of Loganair, known as “Scotland’s Airline”. In this second and last blog, we take off accompanied with the team and record one unique experience.

The shortest commercial flight in the world

Loganair has long held the record for the shortest commercial flight in the world. The trip from Kirkwall in the Orkney islands to Papa Westray via Westray takes about fifteen minutes. The latter leg, from Westray to Papa Westray takes, on average, ninety seconds. Our Senior Aviation Consultant, Adrian Young, flew on this route in June 2022.

This airline does not operate in these islands for the sake of holding obscure aviation records or to keep old aeroplanes in service. These routes link people and communities across the northern islands, Scotland and points beyond. This was highlighted in the local newspaper on Orkney, The Orcadian, in June when Loganair’s CEO, Jonathan Hinkles, wrote an open letter to islanders regarding delays and disruption on some services. Disruption that is in part due to problems elsewhere in the UK. As Hinkles points out, “Unless we completely disconnect Orkney from the wider UK air network and onward flights – which we don’t believe is in anyone’s interests – we can’t isolate Loganair’s Orkney flights from the effect of these issues”.

The 21st of June, midsummer’s day, started off as a foggy one in Kirkwall. This meant that the early morning flights to the islands were delayed by the weather. Whilst Kirkwall has an ILS, inter island flights are flown in VMC as instrument approaches are not available at the island airports.

The 09:30 departure for Westray and Papa Westray was only ten minutes late. Check-in – open until twenty minutes before departure – is swift and friendly. This is small scale aviation; one desk, one gate and one ground agent. The operations are single-pilot and a brief cabin safety demonstration is given before engine start. The BN2 Islander is a piston-engine aeroplane and the engine start sequence is quick. Flight control and other checks are performed on the brief taxi to the runway before take-off. Cruise altitude between Kirkwall and Westray is initially just under 1000 feet with an airspeed of 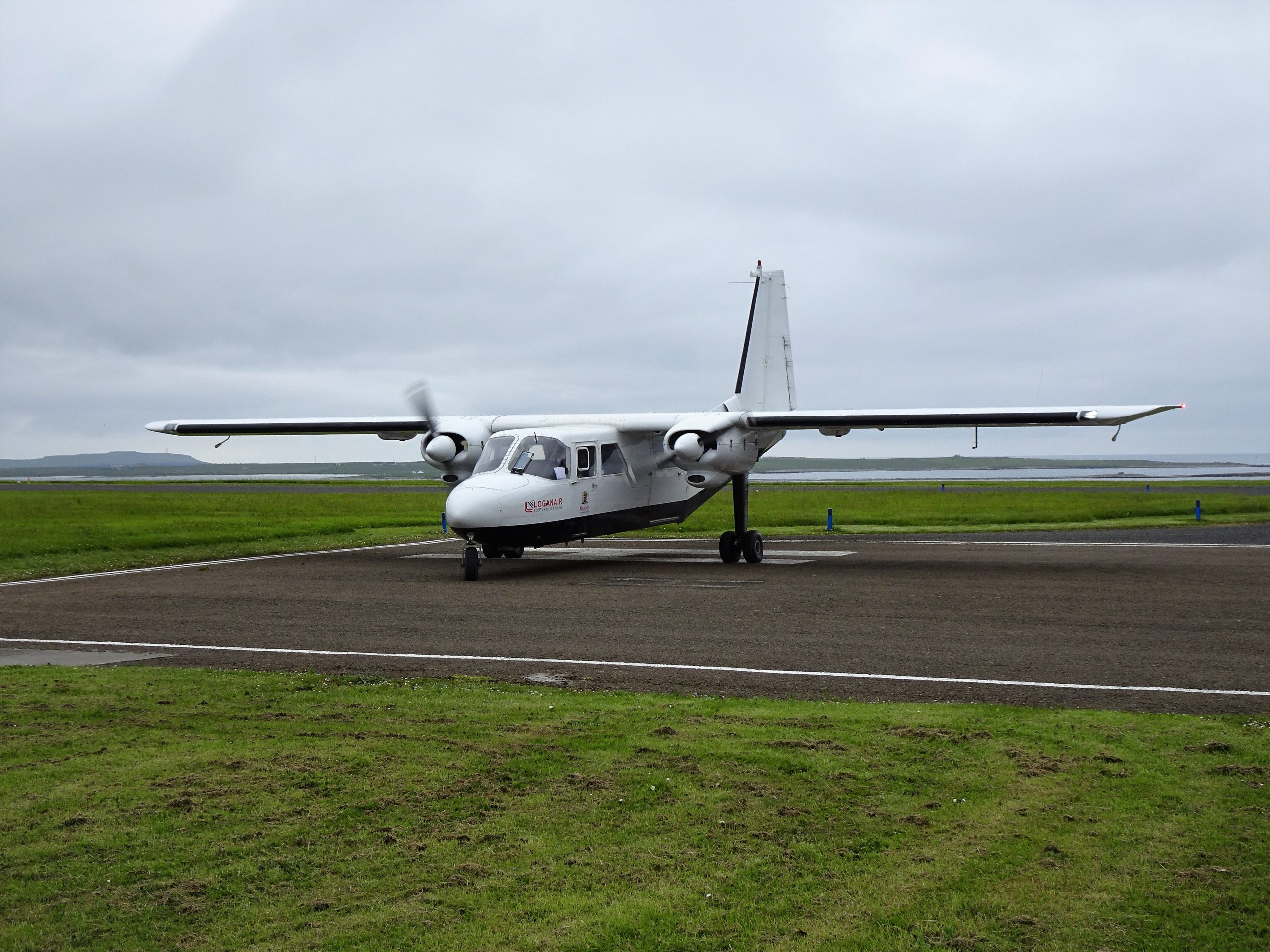 120 knots. A GPS-unit holds a number of VFR-waypoints to help guide pilots to the circuit. As we approach Westray, the clouds lower and we descend to about 500 feet. The airline has dispensation to operate at 350 feet with 2 miles of visibility. Final approach ends with a touchdown at a speed of about 60 knots. Three of the seven passengers disembark at Westray and they are replaced by three new passengers, all assisted by the airport’s fire crew. Airport is a big word for the small hut that has an office, a toilet and somewhere to stay dry when it’s raining. After a stop of less than five minutes, the safety briefing is repeated for the benefit of the new passengers and we are off. The wind is unfavourable for the very shortest flight time between the islands as the plane departs away from the direction of flight and leaves off a downwind leg at Westray. Within seconds, this becomes a left base for Papa Westray and we have crossed the bay in just over two minutes.

The return flight across the bay in the afternoon was even longer; two and half minutes. The weather was better and the views from 1000 feet were tremendous.

The two pilots we spoke to both like the BN2 Islander. It is easy to fly, the GPS acts as a good back-up and it has a stable autopilot. The fuel gauges are basic and their readings can fluctuate but the quantity of fuel in the tanks is physically measured each time the aeroplane is refuelled and crews have a good feel for fuel consumption.

In many aspects any private pilot will recognise this VFR-operation. What they might not see is the professionalism that is involved in balancing safe operations with reliable ones. The weather made these flights relatively simple but Loganair connects the islands with each other and the world the whole year round.

As a footnote, whilst the flights were great fun, the highlight of the day was being totally alone at the 5000 year-old buildings of the Knap of Howar on Papa Westray and in good weather – Orkney is a magical place.

To70 is grateful to Jonathan Hinkles, Andy Smith, Colin McAllister and the staff in Kirkwall in June 2022 for all of their assistance in preparing this couple of blogs. Whilst staff at Loganair were generous with their time in preparing these articles, the blog has not been sponsored by Loganair and the author travelled at his own expense.